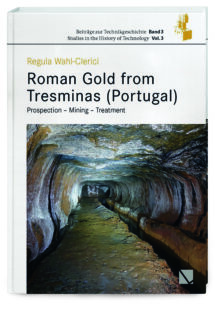 The reconstruction of Roman mining activities in a primary deposit during the 1st and 2nd centuries AD has been made possible thanks to the excellent preservation of ancient mining and the prerequisite accompanying industries in the territorium metallorum Tresminas / Jales. Decades of on-site research and careful documentation of the monuments have faciliated the understanding of the work processes presented in this volume: prospection, excavation and processing.

Within this framework, prospecting not only served the discovery of deposits as reported by ancient sources, but it accompanied the miners’ daily work and was an essential element of the mining process. A special insight into the conditions in an ancient mine is given by the evidence of a catastrophe underground with a subsequent rescue operation.

The mining itself has left traces that enable us to both follow and understand the progress of mining over time. The planning and execution that become visible as a result of this allow us to infer a central organisation. The fantastic extensive high galleries of Tresminas, whose dimensions and state of preservation still impress visitors and researchers today are a further example of this. Finds that were abandoned, never completed or destroyed in ancient times are particularly helpful in understanding the mining process.

The complex processing of the gold-bearing ores has left behind in Tresminas around 1 000 stamp mills, countless rock-grinding mills and enormous ore washing structures.

In addition, the water management system associated with mining and settlement is discussed. An important part of the industrial complex was also the local stone quarrying for the production of stamp mills, rock-grinding and grain mills.

A summary of the historical context of the territorium metallorum Tresminas / Jales is presented in the introduction.

An important contribution to further research into the ancient Greek and Roman economic history, Archaeology of mining and history of technology.

Regula Wahl-Clerici obtained her licentiate in 1980 with a major in Pre- and Early History at the University of Zurich (Prof. Dr. M. Primas). From 1975 – 1984 she was a staff member of the Cantonal Monument Conservation Department of Zurich.

From 1985 she worked on various projects on the Iberian Peninsula under the direction of Dr. Jürgen Wahl. These included the late republican military farmstead “Castelo de Lousa” (Distr. Evóra, P) and the Roman gold mine of Tresminas / Jales.

After the death of Jürgen Wahl (2007), she took over the management of the archaeological investigations in the territorium metallorum Tresminas / Jales in cooperation with the local authorities (Concelho de Vila Pouca de Aguiar) and the Portuguese monument conservation (Delegação de Cultura Norte). The work was accompanied by the scientific institutes of the University of Frankfurt a. M., the Rheinisch-Westfälische Technische Hochschule in Aachen, the Hafen-City-Universität Hamburg and the Universities of Hamburg and Freiburg i. Br.

This publication has been published as a print edition and can also be used open access. (DOI: 10.19218 / 3906897431). The authors and the publisher thus support international scientific discourse and the demand of university institutions for free access to scientific literature. The publication is protected by a Creative Commons Attribution 4.0 International License.

To the series “Studies in the History of Technology”

The editors of the present monograph are Dr. h.c. Alfred Mutz Foundation for Old, especially Ancient Technology, Basel, and the publishing house LIBRUM Publishers & Editors LLC, Basel, Frankfurt a.M.. The series is intended to publish small and large studies on topics of technology and history, on all materials and all epochs, in a loose sequence.